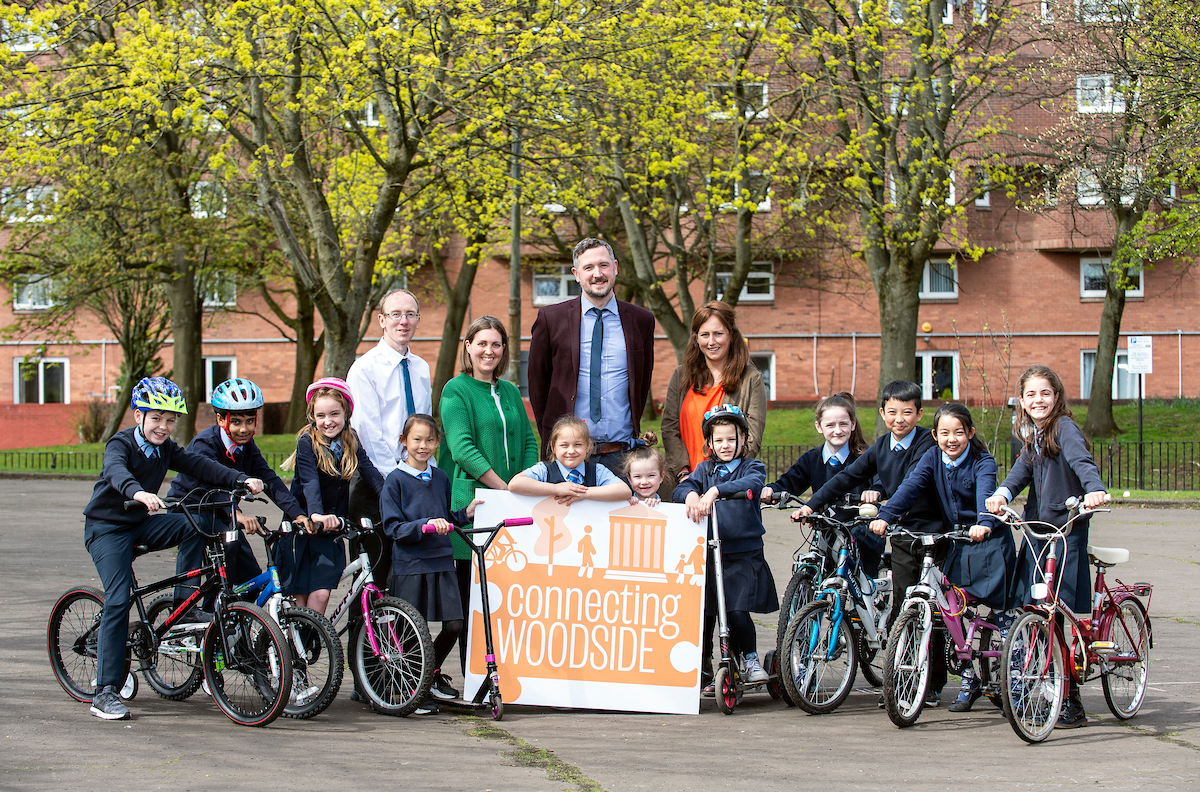 The project, a winner of Sustrans Scotland’s 2017 Community Links PLUS (CLPLUS) design competition, will deliver world-class walking and cycling infrastructure throughout the Woodside community. Through its area-based approach, benefits to the community will include improved health, wellbeing and an enhanced environment.

Pupils at St Joseph’s Primary School in Woodside contributed to the rebranding through submitting creative name suggestions which assisted in shaping the brand of Connecting Woodside. Staff and pupils were joined by Sustrans Scotland CLPLUS Project Co-ordinator, Marie Davis, and Glasgow City Council’s Convenor for Sustainability and Carbon Reduction, Anna Richardson, to announce the updated branding.

The new identity reflects the aims of the project which is to connect Woodside to the wider city for sustainable travel as well as the Woodside community. This will be achieved through implementing an area-based approach to improve walking, cycling and public space.

“This is an exciting first step in the transformation of the area into a neighbourhood which will be safer and more pleasant for people to live in and travel through by foot or by bike.”

Connecting Woodside originally took inspiration from London’s Mini-Holland competition and transport infrastructure in the Netherlands. Part of the project will include a segregated cycle route along St George’s Road from Charing Cross to Possil Road and will connect to the Sauchiehall Street “Avenue” that is currently being delivered through the City Deal Regeneration.

Councillor Anna Richardson, City Convener for Sustainability and Carbon Reduction at Glasgow City Council, said: “The pupils have played a key part in helping rename Connecting Woodside. It fits perfectly. This million pound development will connect Woodside to surrounding areas and beyond, making it safer and better for people walking and cycling.

“Connecting Woodside is more than segregated cycle routes and will transform the area through the improved pedestrian and cycling access, increased cycle parking facilities for residents, schools and businesses as well as public realm improvements.”

The proposal also includes the expansion of the cycle network into the city centre, St George’s Road, Woodlands Road, Garscube Road and the Forth and Clyde Canal in a bid to encourage cycling as the favoured commuter option. The project has the potential to provide a launch pad for a similar approach across Glasgow.

In addition to the health and wellbeing benefits that the extensive cycle network will bring to the surrounding area, Connecting Woodside will strengthen local economies and improve road safety encouraging people to walk and cycle.

Susan Allan, head teacher at St Joseph’s Primary School, said: “Staff, pupils and parents have collectively welcomed the Connecting Woodside project which will create safer routes for our pupils to walk and cycle to school, after school clubs and leisure facilities. We’re excited to watch the area flourish and transform into a community that favours transport by bike or foot.”

Successful projects in the CLPLUS competition are funded by the Scottish Government, with local authorities match funding the grant. Connecting Woodside was awarded £7 million for the development of the programme over the next three years with Glasgow City Council providing a further £1 million in addition to city deal funding for Sauchiehall Street.